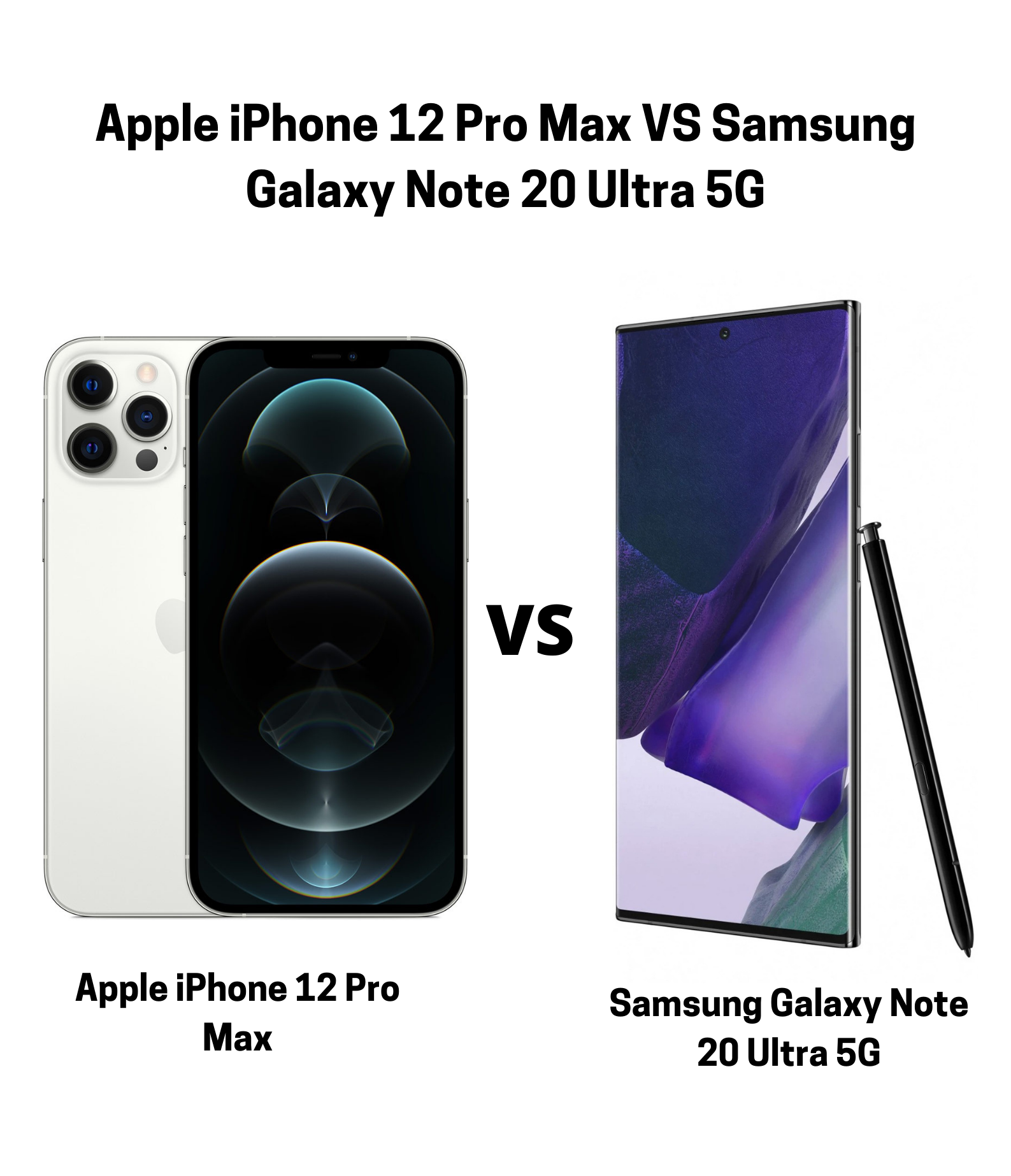 The mighty, never-ending, and healthy war between the tech-geeks vouching for their biggest Smartphone Technology Giants, Apple and Samsung, since their dawn. The Rulers of high-end smartphones, Apple and Samsung, are dominantly releasing their flagship smartphones every year that awe-inspire us with technological advancements. Samsung launched its next futuristic and premium Samsung Note 20 Ultra with S Pen, being a standout feature. Followed this, Apple as always commenced a grand launch of the iPhone 12 Pro Max with other four 4 products that bridge the gap between human existence and technology. Apple and Android users out there excitedly citing the latest features and functionalities the Apple iPhone 12 Pro Max and Samsung Note 20 Ultra has. Let’s break it down here!!

Both iPhone 12 Pro Max and Samsung Note 20 Ultra have an elegant display and a powerful design, refining their previous models and with an inclusive of advancement.

Samsung Note 20 Ultra had always stood high with its premium build of metal and glass combo to contribute to the sturdy and powerful design. Thanks to Gorilla Glass Victus for making it scratch-resistant. Samsung features a stunning 6.9-inch Dynamic OLED Display with perfectly curved edges and a bezel-less punch-hole display. The under-display fingerprint scanner and a cute front camera in the punch-hole add attractiveness to the Display. If you’re an ardent Samsung user and getting yourself upgraded to the premium version, the rear camera bump is no longer a consideration.

iPhone 12 Pro Max, similarly follows a fine refinement of design and display from its previous models. But Apple has done a great job in the built design, by providing a ceramic shield panel and stainless steel on the device to enhance safety. 4 times more protective than other iPhones, Apple says. The old-school large notch display is still existent but with a super responsive Face ID, it’s a great compromise. Apple iPhone 12 Pro Max features an attractive and the largest 6.7-inch Super Retina XDR OLED Display with a resolution of 1284 x 2778 pixels at a 19.5:9 ratio (~458 PPI density).

Apple and Samsung have never compromised on the Camera, making it more competitive. They offer uber-cool camera functions integrating the latest features on every premium model released.

Samsung always stands out from the crowd with its high megapixel camera and Note 20 Ultra is no exception. It features a cool 108 MP (f/1.8), 26mm wide, primary camera lens, a 12MP Ultra-Wide lens. A stunning 12MP Telephoto lens with excellent 5x optical zoom and 50x hybrid zoom makes it unique. A 10MP (f/2.2), 26mm wide Selfie Camera with its dual video call and auto HDR feature let you do wonders

Apple iPhone 12 Pro Max features a standardized and clarity-rich 12MP wide sensor, a 12MP ultra-wide camera, and a 12MP telephoto shooter with 2.5x optical zoom. Apple gets an upper hand here by featuring LiDAR Scanner to take the in-depth and detailing of images to the next level and sensor-shift image stabilization, which is much better than the OIS setup.

The Android Vs Apple battle has been witnessed for ages by the people making both the competitors authoritative, healthy, and prominent ones. But the flagships always have received the best of the best when it comes to the engine.

Samsung Note 20 Ultra is powered by Qualcomm’s fastest processor ever, Snapdragon 865plus, an improved version of Snapdragon 865 and with the latest Android 10 OS. With an Octa-core beast CPU and a powerful Adreno 650 GPU, you can enjoy 12GB RAM of memory. With no further delay, you’re let to experience the multi-storage variants of 128GB, 256GB, and 512GB with an additional feature of the Micro SD card.

Apple iPhone 12 Pro Max is powered by the very latest processor, A14 Bionic chip Neural Engine with an optimized iOS 14. This ensures better overall performance and efficiency. Apple gives the highest 6GB RAM in iPhone 12 Pro Max, whereas Android has already seen it happened. The multi-storage variants here include the same 128GB, 256GB, and 512GB in abundance.

Whatever it is, the performance is never compromised in the flagship models. On seen individually, you’re handling high-performing handheld PCs.

When it comes to battery, though the iPhone receives criticism on Battery Performance, Apple takes it to the hand by giving Li-Ion 3687mAh with 12W fast charging. Test results have shown a better improvement in battery performance when compared to the previous models. Furthermore, the new feature of MagSafe facilitating magnetic charging makes it stand out from the crowd. Surprisingly, Apple excludes the charger for the device, which expects you to spend a few bucks on a 20W charger.

Samsung has the upper-hand here by fueling the mighty 4500mAh Battery with 25W Wired Fast charging and 15W Fast Qi/PMA wireless charging. It also supports 4.5W Reverse charging for you to fuel other accessories like earbuds.

When it comes to connectivity, both the premium devices support 5G networks, WiFi and Bluetooth 5.0, and NFC.

Both the premium smartphones have gone an extra mile to give their best flagships to the world with their standout features. This includes the Galaxy S Pen feature with 4 new gestures from Samsung, providing ease in writing and the very new feature of MagSafe from Apple to take charging to the next level. As a tech-geek, you can see both the premium smartphones have their devices to the mark by all pros and only a few cons.

Visit Poorvika Online today and get your hands on the premium devices!! Make the most out of it by ordering your favorite smartphone and get it delivered to your doorstep with the 2 Hour Delivery option.