Apple M1 vs Intel i9. The Showdown 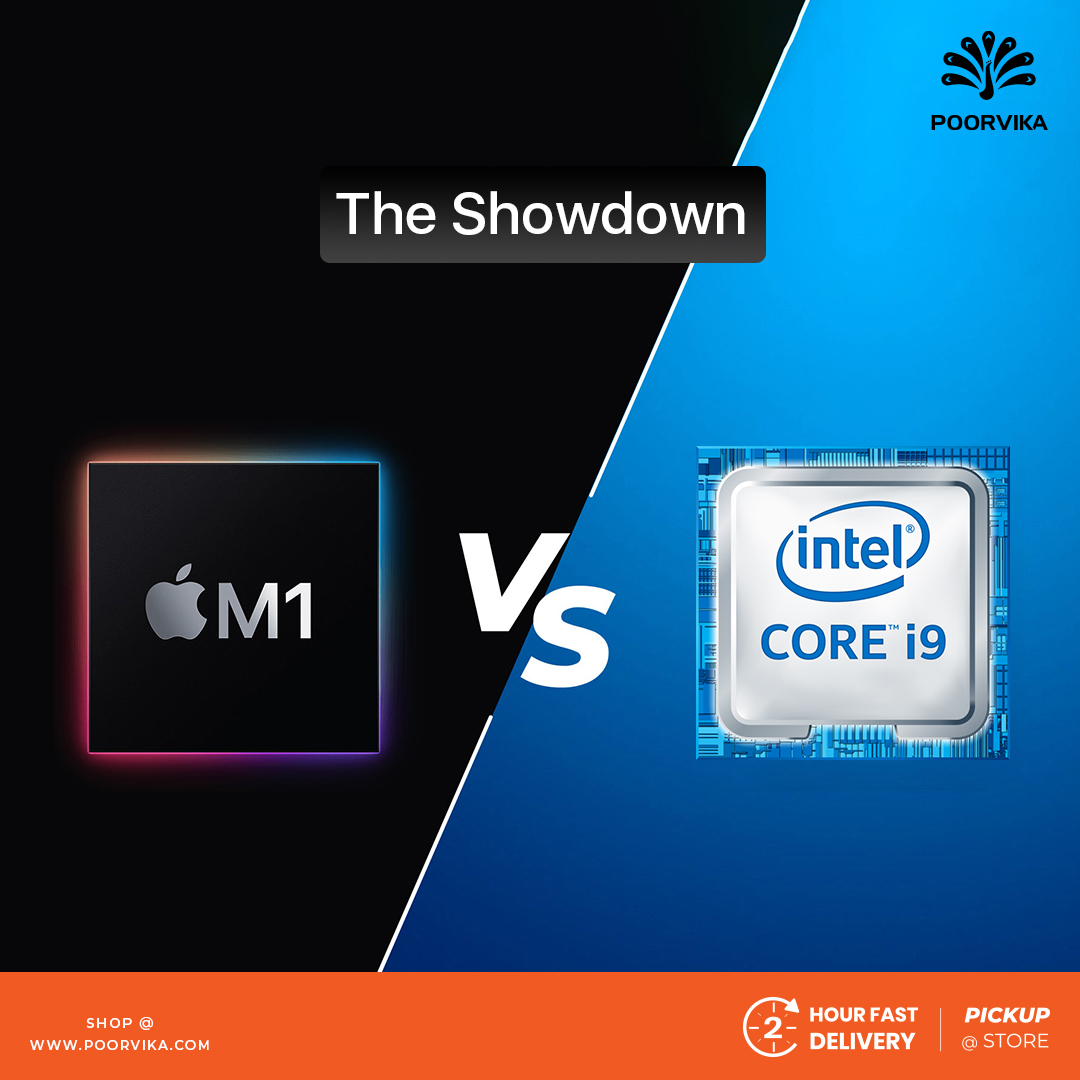 After Apple’s latest one more thing event, their newly launched M1 Chipset has now become the talk of the town, putting intel in the background as they bid adieu to Intel’s chipsets for their computing devices. But then the question still remains as to who is the king of the mountain in the tech world. Is the reigning champion still the i9 or will the new kid on the block the M1, take the title of the most powerful processor. This blog will tell you all you need to know about where they both stand.

Now both the Chipsets are there in the Apple MacBooks. So we will see how they both perform in terms of speed and efficiency. In comparing the Newest Apple M1 present in the 13 inch MacBook Air and the Intel i9 in the older 16 inch MacBook Pro, the performance benchmarks for each of them are quite surprising. Yes, it may seem more like a David vs Goliath scenario at first, as both are from a whole different weight class in terms of specs. Especially with the petite base-spec M1 MacBook Air against a beastly fully loaded MacBook Pro. It’s worth the comparison though, as you read on.

In terms of Single Core performance, the M1 is pretty good because of the fact it uses 4 high-performance cores. Then again, in the Multi-Core performance benchmark, the M1 still manages to outperform the i9. Putting it through its pace in the Cinebench R32 Stress test, the i9 runs over the M1 with a score of 8802 over the M1’s score of 6384. That’s a 38% lead. This is because of the Thermal Throttling feature of the M1 MacBook Air to compensate for the lack of fans in the MacBook Air. The system automatically reduces the performance of the system when it detects overheating due to an overload. This makes the M1 based Air more suited for short burst performance, while the i9 is more suited for longer periods of performance with heavier workloads as it has two cooling fans.

In terms of graphic performance 16 inch MacBook Pro with the i9 floors it. Not very surprising as it has a state of the art stand-alone 5600M GPU that can crush most graphics-heavy tasks. This score will determine how the chipsets will affect gaming and video editing performance. In the Geekbench 5 Metal Performance test for the GPU, the highest score went to the i9 Pro with a whopping 43144, while the M1 Air with its 7 cores stood at 18,830, making it over twice as powerful.

The i9 took the cake for gaming performance as well, in the GFX Bench 5.0 with the Aztec Ruins offscreen test. The scores came with the i9 running it at 135fps and the M1 maxing out at 69.7fps, which does not seem like much of a difference. But when you realize that the scores translate into the i9 being more powerful than the M1 by a staggering 95% it makes a real difference in gaming performance. With games like League of Legends, the M1 maintains a score of 82fps while the i9 maxes out in the lead at 160fps. Also, as a lot of apps haven’t yet been optimized for the M1 you are forced to use workarounds in the likes of Crossover and Parallels to run games. The 16 inch Pro with the i9 made it very easy with Bootcamp, and it performs much better.

When it comes to the usual everyday functions of professionals like Video and Photo editing or Audio engineering, the tests show something a bit different. In the Logic Pro test, which teats the chipsets based on the number of tracks that can be run without overloading the CPU, the M1 comes right behind the i9 with the M1 at 90 and i9 at 97, which is pretty impressive with the M1 running just the chip. This makes the M1 something of insane value to music producers.

Photo editing using the M1 is pretty snappy and smooth with LightRoom. It performs pretty well even while Exporting 50 RAW photographs of 42MB each with not much of difficulty. Later on though, with a heavier test of exporting 500 RAW photos, the M1 struggles to keep up and suffers from Thermal Throttling.

With the Xcode test, the M1 outperforms the i9 in leaps and bounds. This comes as quite a surprise based on the previous tests. What makes this even more surprising is the fact that the i9 Pro runs this benchmark very hot with both its cooling fans runnning at full blow. The M1, on the other hand, barely even gets warm. Considering it doesn’t even have a fan to begin with, and resorts to Thermal Throttling in the case of overheating, its a wonder as to how the M1 pulls off such a stunt. The optimized ARM architecture and unified memory is what gives this chipset such pulling power even though it has just 8GB or memory compared to the i9 Pros 32GB RAM. The BruceX benchmark test puts the graphical components through its paces. Here the i9 stands out due to its stand-alone 5600M.

You can get the new 2020 MacBook with the M1 chip starting at Rs.92,900 right here at Poorvika. Head over and make the most of our various discounts and offers. Have your device in your hands even faster with Poorvikas 2 hour delivery promise as you opt for the 2 Hour Fast Delivery option during the time of placing your order.