There are two ways through which a product can become famous. One is by marketing, and the next is by delivering quality products. The Taiwanese manufacturer belongs to the latter category. ASUS has become a formidable force in the Computing Industry, by manufacturing top-notch motherboard for computers and laptops. Though ASUS is known for their Gaming Components, it initially became famous because of its motherboard. This blog will be a comprehension of the specification and real-life performance of the ASUS Vivobook Ultra laptop.

Even though the American manufacturers dominate the computing industry, the Taiwanese manufacturer has earned a separate fan base by delivering high-quality gaming products. And over the years, one can explicitly see the irresistible thirst of ASUS through their products.

Though the i3 11th Generation is a Dual-Core processor, it is no slouch because its real-life performance is proof to validate the statement. The Clock speed is pretty close to the older Quad-Core processors.

This kind of improvement in performance shows the innovation of the Intel products.

Intel uses their own architecture. Unlike Mobile processors, where they solder all the components on the Chipset, the laptops don’t use System on Chip.

Intel has built the i3-111G5G4 on Tiger Lake U Microarchitecture. Each core of the Chipset uses Willow Cove cores which supports Hyperthreading. Thus you will not face any issues while multitasking.

Though the CPU’s base clock speed is just 1.70GHz, using Intel Turbo Boost Technology, the Chipset can achieve up to 4.1GHz. You can see this improved performance explicitly while using intensive applications like designing posters in Adobe Photoshop.

The 6 MB L3 Cache memory may seem petty on paper, but its contribution improves the performance significantly in the real-life scenario.

GPU performance of the 11th Generation chipset is 20 per cent faster than the previous generation Intel Core i3 chipset. While talking about Chipset, we often tend to forget about the Graphical Processing Unit (GPU).

The user will be able to visualize all kind of content through this component only. It plays a pivotal role in shaping the User Experience.

The ASUS Vivobook has a 15.6-inch Full High Definition, Anti-glare Display with 1920 x 1080 Pixels. In simple words, inside the Display of the Vivobook Ultra, there are 2,073,600 pixels. Since it can store many pixels, the picture clarity of its display is fantastic.

The border of the images are sharp, and the colour reproduction is also very accurate. ASUS has reduced the size of bezels on the display’s left and right side to 6.8 mm, making bezels almost non-existent. This bezel size allows user to watch more content within a frame.

Chiclet Keyboard of the Vivobook has a Numeric Keyboard. The keys are spacious and highly comfortable while typing lengthy passages or essays. Students will love the agility and responsiveness of this keyboard. Though it lacks the page up and down buttons, you won’t have an issue as you start using the laptop!

Speaker is another component that contributes to the display in refining the user experience. The parental company of the JBL Harman/Kardon manufactures speakers of the Vivobook Ultra.

Audio output from the speaker of the Vivobook Ultra is loud enough to fill an ample space. There was no loss in detail even during the highs. By using Cortana, you need not open the browser to get search results. All you have to do is to speak to get things done.

ASUS Vivobook Ultra has an 8GB DDR4 RAM and an M.2 256GB NVMe (Non-Volatile Memory) PCIe 3.0 SSD. Large modules inside the RAM works at unbelievable speeds, and only while multitasking we will realize their importance. M.2 PCIe Solid State Drive is connected directly on the laptop’s motherboard to reduce Data loss.

The Vivobook has two features: The BIOS Password Protection and the fingerprint sensor.

The BIOS Password Protection is an additional security layer that stores a password on the Vivobook Ultra laptop’s CMOS memory.

A battery on the motherboard supplies power to the sensor even after you turn off the laptop. Once you protect your laptop using BIOS Password Protection, no one other than you can access the laptop.

Considering the performance and features, Vivobook Ultra is a perfect laptop for Students. The ASUS Vivobook Ultra’s price in India is Rs.43,990.

Poorvika has a solution to get rid of waiting time after ordering a product online. Avail of our 2 hour delivery service to get the laptop instantly to your doorstep. 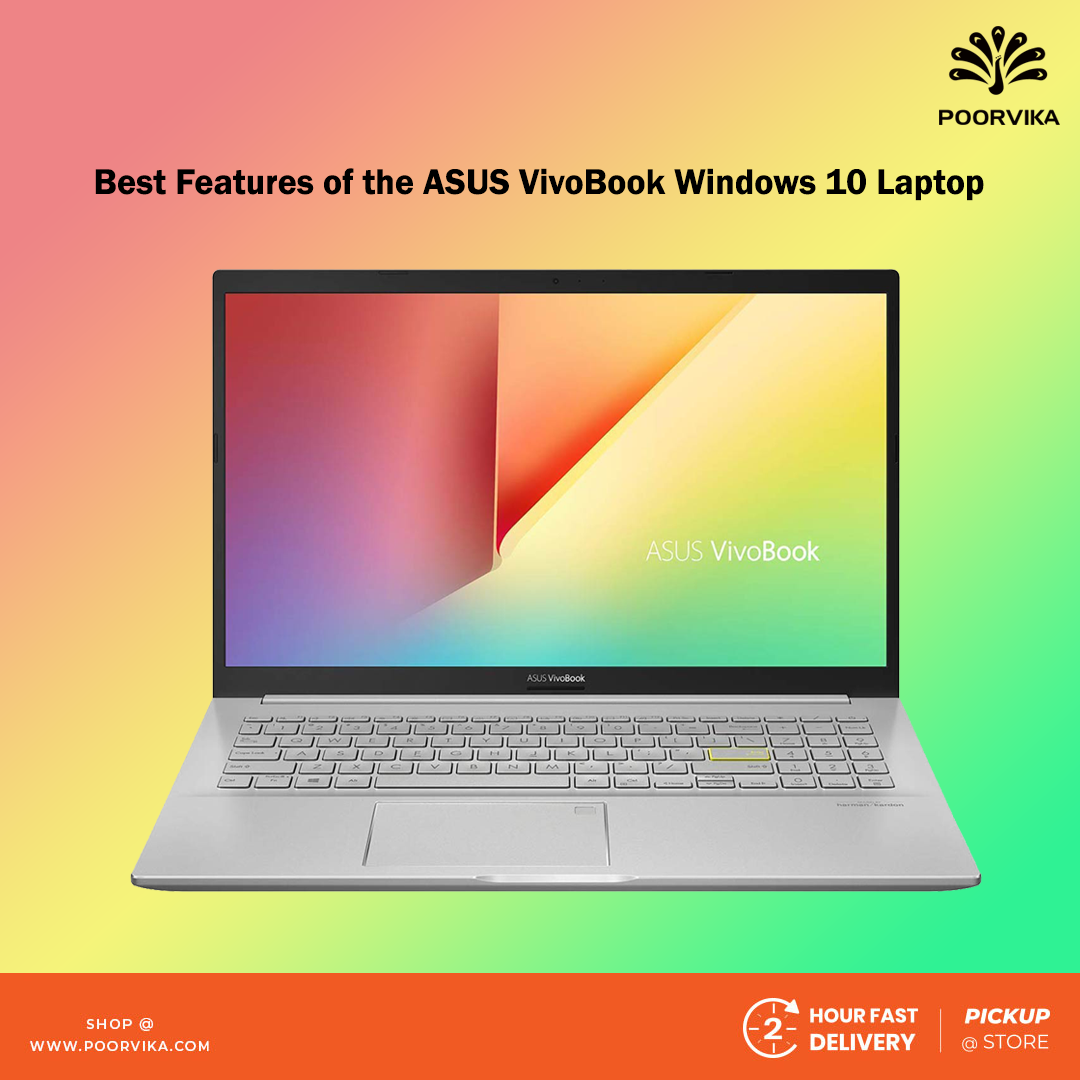